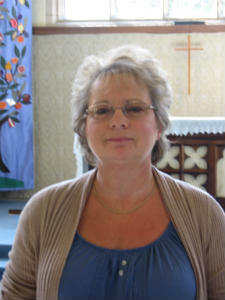 I attended a church throughout my childhood and teens and was fully involved with youth groups and the social side.  I then had a gap of many years and even though I felt I wanted to go back to Church, my young children were very much into weekend sports and I thought if I couldn’t  go to Church on a Sunday what’s the point.  I was then invited to attend an Alpha Course at Christ Church and the timing seemed so right for me. As soon as I came along I knew this was the place I wanted to be.  I also discovered a deeper faith that had been lacking in my early years leading to my Confirmation about 3 years ago.  Church isn’t just on a Sunday, it becomes part of who you are 24/7.  There are still times when I can’t make a Sunday but there is so much more to Christ Church than this. There lots of events going on throughout the year. I help organise Ladies Evenings, quiz nights, talks, courses as well as the annual Charity Fayre which is a great opportunity to be able to put something back into the community. Through all of this I have made some very good friends.  I also sing in the Worship group and to me this is one of the best ways I can praise God on a regular basis.  Although I haven’t managed to persuade my two sons to come along, my husband Jeff does attend some Sunday services and some of the social events. 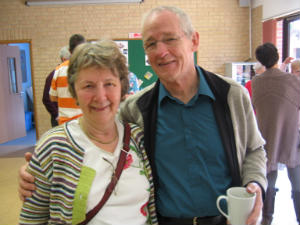 I (Judy) was baptised as a baby and sent to Sunday school although my lovely parents didn’t go to church. My C of E secondary school grounded me in knowledge of the bible but it never became a personal relationship with Jesus. At twenty Mike & I were married and over the next nine years had three daughters. We came to Flackwell Heath in 1977 and, although the younger two settled quickly, our oldest daughter found it difficult. Someone at school invited her to Christ Church and she told us she wanted to be confirmed the following year. Anyway, I thought I should check out the church! I found a warm community and a living faith in Jesus Christ, going forward for confirmation the following year. I learned that becoming a Christian does not protect you from the pains and knocks of life, whatever they prove to be, but it means that, even when you feel most alone, God doesn’t leave you.

I (Michael) was brought up in the Roman Catholic Church in Dublin and went through all their rites of passage, even serving as an altar boy. My father died when I was 8 and I was told I was ‘the man of the house’ and became a bit of a tyrant to my 4 siblings. One day in church, when I was around 12, it seemed to me that there was a lot of hypocrisy around, particularly from the men.  Having judged them, I concluded soon afterwards that I was no different and stopped going to church. Some months later I decided that there was no God, when I deliberately vandalised some public property and no lightning bolt descended to annihilate me! I left school when I was 14; they were no doubt as pleased to get shot of me as I was of them. When I was nearly 16 I left home to work my way round the world. I reached London before I was 17 and worked as a waiter in a Hotel. Soon after this I met Judy, who was going out with the friend of a friend! We married when we were 20.

Judy’s mother was diagnosed with cancer late in 1975 shortly after retiring. She spent the last few months of her life with us. We were both by her bedside when she died and there was a real sense of ‘Mum’ departing - one moment she was there and the next she was gone. That was a real spiritual awakening for me and it had a profound effect. When our daughter and then Judy started going to church and got more involved I was really challenged. I was surprised at how much religion I had retained and I found myself to be quite an expert on how ‘Christians’ should behave. I was not very kind and made life progressively more difficult, especially for Judy. I didn’t like it that she actually wanted to read the bible and go to church and was somewhat critical of the church and church people generally.

My experience at Mum’s death caused me to believe deep down that God was for real, that death is a doorway, that there is life after death, but I didn’t want to go to church or to read the Bible. My thinking was ‘you can’t be blamed for what you don’t know!’ At some stage I realised that there was a flaw in my reasoning - deliberate ignorance is not an excuse. It came to a head one day, when I was having a violent row with Judy, I was appalled that I could treat another human being so badly. I rushed upstairs with tears in my eyes, went to our bedroom and said aloud over and over “God forgive me!” And He did! Later on I said sorry to Judy and asked her to forgive me too. I started going to Christ Church where the rest of my family attended. I developed a real hunger for the Word of God, attending as many courses and seminars as I could and read the Bible regularly. At a Christian Camp in 1985, I realised I had still been trying to earn my way, to be worthy of salvation, but that God’s Grace came through the sacrifice of Jesus Christ. The insight came as I cut a piece of cake and offered it to my daughter, I realised that she couldn’t eat it until she took it from me! All I had to do was take God’s free gift, say thank you and go on and live in the good of it! Which I did, and continue to do, accepting that I’m a work in progress.

One of my regrets, having become a Christian, was the ‘lost years’ - I was remembering the twelve year old who turned his back on God. However, at a Full Gospel Business Men’s Fellowship dinner, a man was telling us stories about his experience of God working. I felt sad as I realised that I could not do that. Later he read a verse from Joel: “I will give to you the years that the locust has eaten”.  It was awesome, it was as if God was speaking directly to me.  I cried with joy – I understood God to be saying that He would make up to me all the time lost!

And now I have lots of stories! Having been to Albania many times before and after the Iron curtain fell, I’ve lived in Mongolia for over 3 years and I continue to have adventures with my Lord, Saviour and friend, Jesus.