For over 85 years Christ Church, the Parish Church of Flackwell Heath, has been a natural place for people of all ages to come as they celebrate, mourn, mark new beginnings and above all, worship the living God.

Until the 1940s Flackwell Heath was a tiny community of three or four hamlets linked by country lanes. The forerunner of the present Christ Church was a small wooden structure with a brick frontage built in 1932. It seated approximately 50 people. It was built by public subscription with parishioners of Little Marlow, Loudwater and residents of Flackwell Heath contributing ‘a penny a brick’ to a building fund from the early 1920s. The Church building was dedicated and named Christ Church by the then Bishop of Buckingham, Dr Eliot, on Sunday 5th June 1932. The new Church building was associated with St John the Baptist, Little Marlow as it was built in its parish. 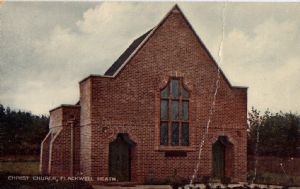 As the village grew, particularly with large post-war developments, the church building became simply inadequate to cope with the spiritual and pastoral demands of this expanded population. From the early 1950s the Vicar of Little Marlow, Revd Jayne broached the idea of a larger building and within a few years the old wooden structure was dismantled and a new church built, incorporating the old brick façade. The new Church was consecrated on 31st October 1959 by the Bishop of Oxford with the Lord Lieutenant present and a new chapter in the spiritual life of this community was opened. 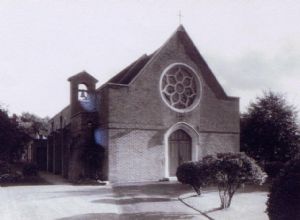 It was certainly in the mind of those early members of Christ Church that this Church would need a Hall and various schemes were discussed and even drawings produced, but nothing materialised. In the 1970s a small pre-fabricated building previously used as the village Barclays Bank on The Common came to the end of its working life and was bought by the Church and erected on an adjoining site. This concrete sectional building faithfully served the church and community for some 20 years. But eventually this second-hand hall became inadequate and the Church agreed that a new building would help address the growing needs of both church and community. 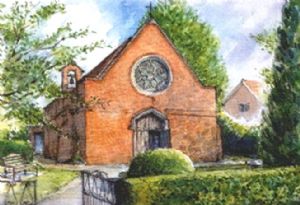 In 1999 the Parochial Church Council gave the green light to a building project for a new Church Centre. Through a tremendous amount of generosity and hands on work by Church members and the local community over £500,000 was raised, and the new Christ Church Centre building was opened in November 2002. An open weekend enjoyed by over 700 people from the Church and local community preceded the Bishop of Buckingham and the Lord Lieutenant opening the new building on the evening of Monday 4th November 2002 to a packed Church marking this new phase in its history. 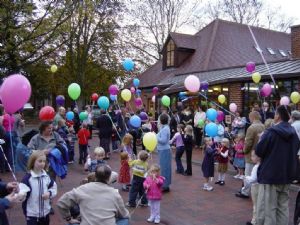 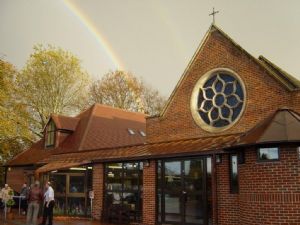 The project encompassed more than can be seen on the site. For many years Christ Church has tithed its income to support five mission links, three of which are overseas. The commitment to build included a commitment to raise an additional 10% of the building cost to give to other building projects, with particular concern to overseas projects. Suffice to say that a £½million project generated a tithe of £50,000 to support projects in poor regions of South Africa, Mongolia, Zimbabwe, Nepal and Albania.

In 2007 Christ Church celebrated its 75th birthday with a year of special events and a packed Anniversary Service in June. 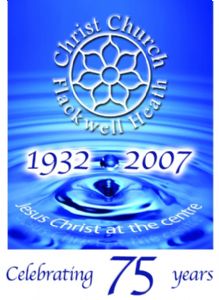 But what of the future? Each phase of its life has not been an end in itself, but the opening up of a whole new beginning. Each year and generation opened up fresh challenges and opportunities to look forward to. The buildings may have changed but the call hasn’t... to proclaim afresh in each generation the good news of Jesus Christ. Buildings change and develop, people will come and go, but the Lord who is faithful is everlasting... and his love endures forever. 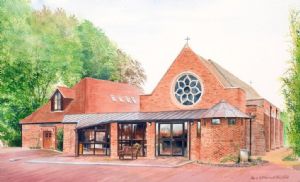 A feature of Christ Church is the stained glass rose window, put into the brick frontage in 1961. It was dedicated on the 5th November ‘to the glory of God and in loving memory of Minette and Frank Stone-Wooton’ who were both prominent in the movement to provide the original building in 1932. The window was given in loving memory by their children. 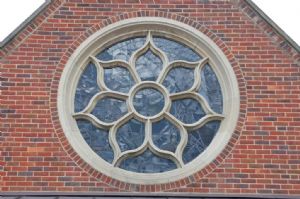 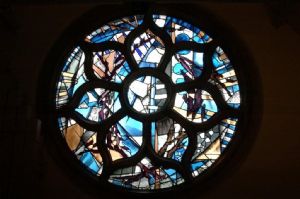 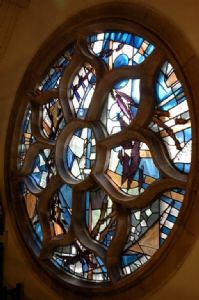 In the past it had been attributed to John Piper (1903-1991), a leading stained glass artist, although an artist local to the area and a friend of the maker Patrick Reyntiens maintains it was Reynteins’ sole design. It was constructed and assembled in Reynteins’ studio in Heath End Road, Flackwell Heath, and is of an abstract style using blue, grey and stone colours with old glass - Reynteins favoured using painted grey oxides over blue glass. There is a crown of thorns motif against a background of jagged and angular shapes. There is no red in the design however, which is unusual as Reynteins was very aware of the religious significance of reds and used them sparingly but to great effect.